Something evil just woke up after 2000 years, and it wants to escape and feed…

A celebrity archaeologist is on the track of a mystery dating back to the days of Roman Britannia. The clues lead to a tiny Welsh island, and an ancient horror that the Roman Army left behind.

When a UN official’s body is fished from the sea, Peri Carlton is sent to investigate the island by a new boss – who thinks there’s something strange about her.

Peri finds the foggy little island strangely quiet – what happened to everyone?

Something hungry is loose on the Island of Fog and Death. And if it reaches the mainland, the consequences will be disastrous.

Can Peri stop the monster? Or will she be its next meal? 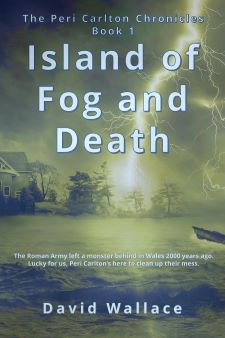 Buy the paperback from Amazon.